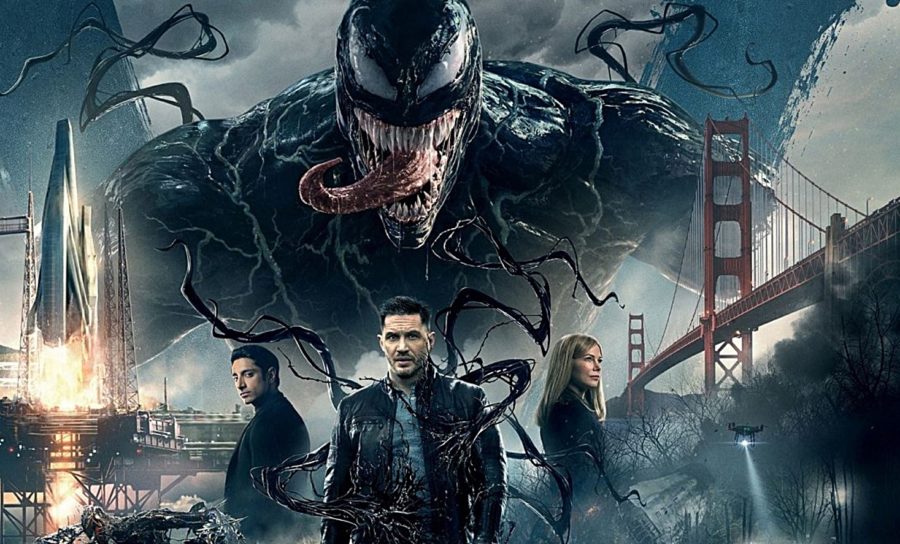 “The world has enough heroes.” The tagline of 2018’s Venom says it all: the movie-market is inundated with superhero movies from major movie studios like Marvel and DC. Movie-goers are desperate for something new, something original, and Ruben Fleischer promised to deliver with his adaptation of the comic-book anti-hero. While some fans were thrilled with the film, others (such as myself), felt it lacked direction and purpose.

What I think Venom lacked most was a solid script. The dialogue was washy and unfocused, filled with unnecessary scenes and stilted conversations between Eddie Brock (portrayed by Tom Hardy) and his girlfriend Anne (portrayed by Michelle Williams). There were also scenes that could’ve been defined as many genres: romance, horror, even comedy. As a result, the movie as itself lacked a clear defining factor. It could’ve been an edgy, gory horror movie— but Fleischer included forced jokes from the man-eating Venom that killed the tension. It could’ve been a comedy, poking fun at the whole being-inside-another-mind concept—but it included scenes of decapitation and gore. I feel like if the movie had chosen a direction and clear genre, it would’ve been more successful, as opposed to creating a luke-warm mix of all three.

The other thing that frustrated fans was the conflicted marketing. Misleading trailers have begun to sprung up across cinematic genres (one of the more recent occurrences being in the Avengers: Infinity War trailer which portrayed the Hulk fighting alongside the rest of the team when, in actuality, Bruce Banner never transitioned into the green monster). One of the major taglines of the film was a quote when Venom growled, “The way I see it, we can do whatever we want.” Whenever this line was played in a trailer, it was accompanied by gruesome imagery and disturbing screams. In the actual movie, it was thrown in at the end of the film as a comedic line. I’m not sure if that was supposed to be a funny twist, but the line itself fell short and it felt like the marketing team wasn’t working in tandem with the editing or even screenwriting departments. Because of how it was marketed with creepy images and dark taglines, the audience came in expecting a horror-esque film, when in fact they were going to see an off-beat anti-hero comedy.

Even so, the film didn’t entirely blow past audiences “like a turd in the wind” (yes, that is an actual quote from the film). There were a few great action sequences, including one motorcycle chase that was absolutely thrilling. For the few scenes where the film did embrace its horror genre, they were edgy and awesome to watch. But it was still missing something. If Fleisher had embraced the R rating like Deadpool did, instead of cutting corners to keep it PG-13, they could’ve had a chance at creating something great. Because they chose to play it safe, Venom left fans unsatisfied and wishing for more fear.