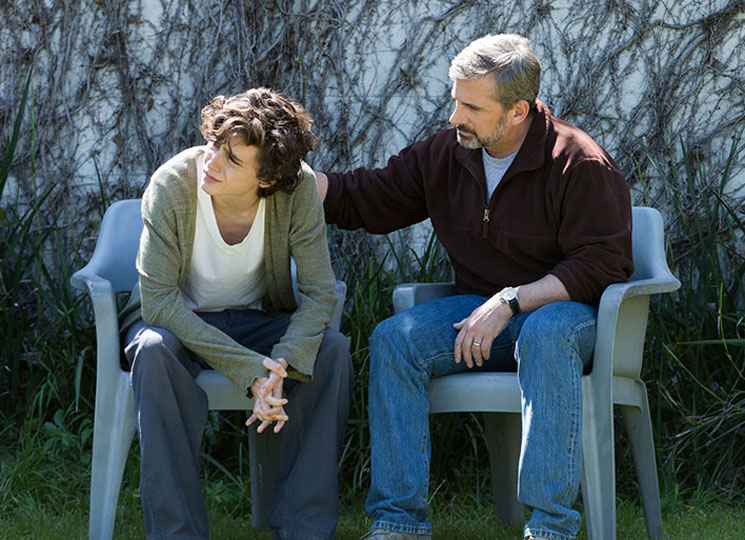 Beautiful Boy, directed by Felix Van Groeningen, tells the true story of teenager Nicolas Sheff and his struggle with addiction, starting in high school all the way up to graduating college. It’s a dark, heavy drama that surprisingly finds two stars of the hilarious comedy, The Office, among the lead cast (Amy Ryan and Steve Carell). The pair give heart-wrenching performances as they struggle with the reality of what their son, played by Timothee Chalamet, has become. While “based on a true story” has become overused terminology in the movie industry, Beautiful Boy takes the phrase to new depths and forces the audience to face the true reality of addiction.

One of the things I found most intriguing about Beautiful Boy was Chalamet’s performance. While the teen has been seen in other popular movies such as Interstellar and Lady Bird, this was his first lead in a large-release flick — but at first look, you wouldn’t know it. Chalamet’s performance is subtle, sincere, and multi-faceted as he encompasses the love, hate and sorrow that comes with drug addiction. The character could’ve easily been over-acted or over-dramatized, but Chalamet does a phenomenal job of balancing Nic’s seemingly unstoppable addiction with his desire to become clean.

Even though Steve Carell is best known for his leading roles in comedies, he seems to have found a new facet of his acting ability in Beautiful Boy. He truly makes you feel for the character and the audience seems to stand side-by-side with Nic’s father as he realizes what his son has become. There are certain scenes that extremely difficult to watch, especially a specific scene where he reads his son’s diary. Carell and Chalamet are an excellent pair that truly drive the movie forward.

Another aspect that stood out about the film was its plot structure — or, rather, the lack of it. Beautiful Boy does not follow the classic three-act structure of movies, books, and other forms of art. Instead, it trends towards the swooping highs and lows of life that drug addicts deal with as they swing from remission to relapse. Because of it, there is some drag in the pacing at times. But even as I state that, from my point of view, there was not a single shot wasted throughout the film. Every establishing shot, every zoom had a purpose, whether that was for foreshadowing, advancing the plot or emphasizing an emotion. The simple, clean shots made the cinematography of Beautiful Boy feel down-to-Earth, and brought the audience closer to the characters as a result.

Beautiful Boy is not for the faint of heart. It has multiple disturbing scenes that, while necessary to understand the full plight of the characters, may be disturbing or triggering to some viewers. I think the film is an important piece of art that makes each one of us consider the idea of true addiction and how lives are ruined because of it.