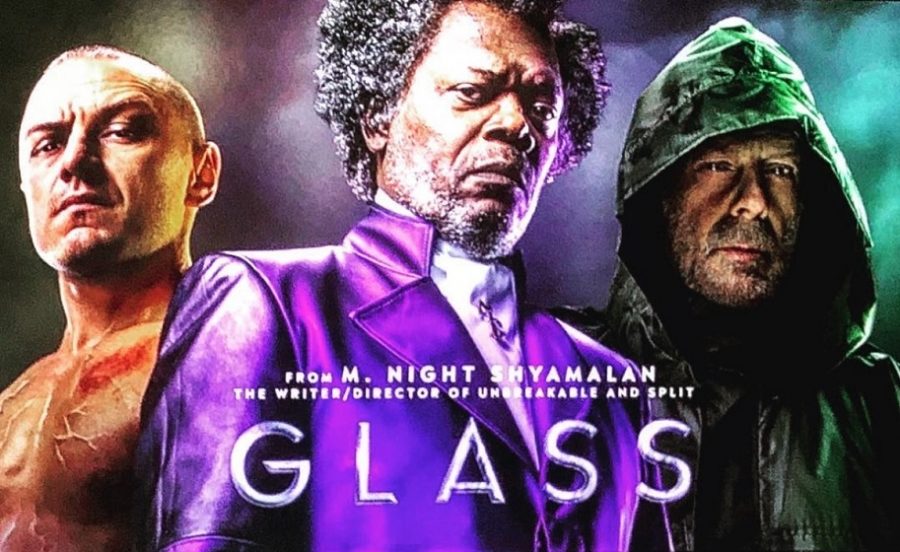 Now, as soon as I saw the review-split on this movie, I knew that it was going to be one of those movies that people either love or hate. Sitting at a 36% on Rotten Tomatoes and a 7.2/10 on iMDB, there was obviously some discrepancy as to whether or not Glass was a solid conclusion to the M. Night Shyamalan “superhero” trilogy. And when I walked out of the theater after I saw it, I can understand why. There was some aspects of the film that really thrilled me, and others that left me unimpressed and confused. But the more I think about it and mull over the third act, the more I realize how much I enjoyed the film.

In preparation to viewing Glass, I made sure to refresh myself on the precursors to the film: 2000’s Unbreakable and 2017’s Split. Both movies were directed by Shyamalan, although it wasn’t made clear that the latter was connected to the Shyamalan-verse until the final sequence, which showed the Unbreakable protagonist, David Dunn, sitting in a coffee shop talking about Mr. Glass. I enjoyed both films immensely, and I was interested to see how the characters were connected. Again, there were parts that I absolutely loved and others that I wasn’t so sure about. So let’s jump into it.

Although the movie is most widely proclaimed as a sequel to Unbreakable, Split’s lead actor, James McAvoy, truly shines in this film. I’ve been saying for years that McAvoy is my favorite actor — I loved his portrayal of Professor X and Mr. Tumnus — but the character of Kevin Wendell Crumb is where his true potential as an actor shines. Crumb has an exaggerated form of DID, giving him nearly 20 distinct personalities which McAvoy gives separate accents, mannerisms and physicalities. It’s a fantastic performance and he really shown through as one of the best parts of the film.

________, who played David Dunn, and Samuel M. Jackson, who played Mr. Glass, also performed well in the film, but I believe McAvoy outshone them both. Dunn was on the side-lines for most of the film. He wasn’t even given that many lines, and I can’t help feel like his character was pretty side-tracked, seeing as it was a sequel to Unbreakable. Samuel M. Jackson also did well, although his character didn’t really get involved in the plot until the second act of the film. Even so, there was a dark energy to his physicality and performance that built a mysterious tension around him. It made the audience suspect that even when it seemed like he was heavily sedated, he was still plotting and aware of what was happening. It was a very subtle performance that I really appreciated.

Another thing I’ve loved about all the Shyamalan movies I’ve seen is the cinematography, and Glass was no exception. There were so many stunningly visual moments that were gripping and spoke volumes of the tone of the piece. I’m a sucker for long and POV shots and Glass had both, but not in excess. The color choices were great, every shot having been planned and executed with a purpose.

Now, onto the real negative: the third act. Shyamalan has a habit of setting up a great story in the first half of the movie and then not being able to follow-through with it in the second — some are even calling it “Shyamalan-ing a film.” Glass definitely suffered from this. The third act was messy, complex, with supposed plot-twists not really aligning with the rest of the film. These characters have so much potential, and I’m not exactly sure what Shyamalan was thinking when he had the trilogy finish this way. But I believe that this sour taste left in my mouth is a large reason that there is so much discrepancy in reviews. The rest of the movie was great, and if you forgive the last act, it’s a solid film. For those who can’t see past it, though, it taints the rest of the film. There’s no right or wrong way to feel about the movie, it’s just how people interpreted it.

As for me, I definitely need to see Glass again to delve deeper into the characters and the story. A second viewing is usually when I solidify my thoughts on a tough movie like this one with many positives and negatives to weigh-in. Overall, though, Glass was an enjoyable film. I recommend that, before listening to reviews on either side of the debate, you go see Glass for yourself (after first watching Split and Unbreakable, of course).

Good Choice if You Liked: Split, The Dark Knight, Unsane