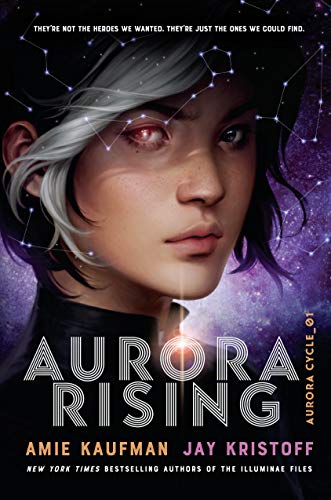 Every time it seems that Amy Kaufman and Jay Kristoff have reached their peak in storytelling, they outdo themselves. Aurora Rising is no exception. A masterpiece in descriptive writing and world-building, this sci-fi drama will win over the heart of anyone who’s ever felt like a misfit in a world full of “Alphas.”

Tyler Jones is the top ranking Alpha of Aurora Academy. He’s trained for years in leadership, flight and combat skills, receiving perfect scores on every one of his assessments. As he’s easily top of his class, he expects to receive a top-not squad from the pool of recruits ripe for the picking. But on the morning of the draft, he takes a joyride that leads him to a girl named Aurora — in the crash scene of an accident that occurred two centuries earlier. Tyler’s choice to save the girl causes him to miss the entire ceremony and lands him with the last choice picks for every member of his squad (not exactly best case scenario). With the mysterious Aurora by their side, the rag-tag bunch of nobodies ends up embarking on a mission that leads them down a path they never expected: one that causes them to unravel everything they thought they know about the galaxy and beyond.

It’s impossible to tell the book is authored by a duo. The story flows seamlessly, each perspective of the squad contrasting and complimenting each other. Each of the seven characters have a very distinct voice, and even if each chapter didn’t announce the perspective of that part, the reader would be able to tell within the first few sentences who was speaking.

The scale of of the world that Kaufman and Kristoff have created is massive. From “modern” technology to character dialect, each invention of Aurora Rising was crafted carefully and purposefully. They’ve included an incredible amount of detail, and it’s impossible not to become instantly lost in the story.

A thrilling science-fiction piece, Aurora Rising is filled with humor, excitement and a whole lot of heart. It’s an age-old story of a group of misfits that find themselves in each other, retold in an incredibly immersive space-setting. The book is perfect for anyone looking for a mix of feel-good friendship and adventure — or who longs to reclaim that reading-under-your-covers-past-bedtime feeling.