Playing for one of the Best Basketball Programs

Seton Hall sophomore Jared Rhoden helps push the team to the top of the rankings. 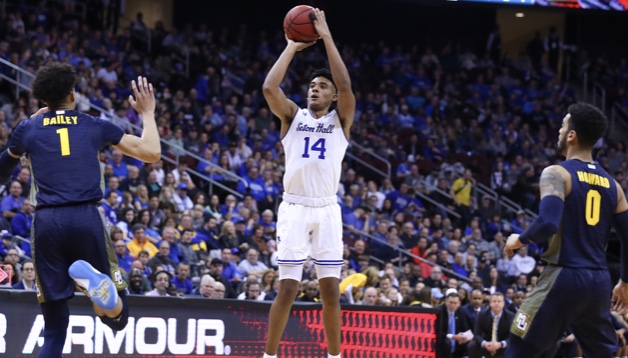 It is the dream of hundreds of thousands of kids to play in some sort of professional sports league. NFL, NBA, MLB, you name it, sports are seen as a dream job by many. However, maybe unbeknownst to young children, it takes a lot of hard work and effort to reach the top. The hardest part is going from college to the pros since you have to balance working your butt off to play the game you love and becoming a hard-working student as well.

Sophomore forward Jared Rhoden from Seton Hall University knows this all too well as a D1 starter for a team looking to take home the Big East crown.  He has to put in the work both on and off the court. As a business major and 20 minute per game player for the Pirates, he has his hands full.

“It’s very time consuming but every time I have to study or put in that extra hour on the court, I think about how it’ll pay off eventually,” Jared said.

That work ethic is infectious and is one of the many reasons Seton Hall is 1st place in the Big East so far this year at 6-2. It also shows up in the stat sheet, as Jared Rhoden leads the team in steals averaging 1.4 a game. Since he has shown he is willing to do the nitty-gritty stuff, the rest of the team follows his lead.

“I’m a leader by example,” Jared said. “Showing by example by just playing hard and doing all the intangible things.”

That leadership quality he possesses started from when he was a child growing up in Baldwin, New York. Baldwin is a very diverse town with people from all different ethnicities calling it home.

“I learned how to pick a different part of different people and accept people for who they are for different reasons,” he said. “I became that person who was just open-minded and comfortable with everybody.”

Jared has had to learn how to adapt since he was a kid and when he first visited Seton Hall, he said he was overwhelmed.

“Being new to anywhere whether it’s a campus or a new place you’re staying it’s overwhelming a little bit,” said Jared. He credits his teammates and friends he made on campus for really helping him acclimate to life on campus.

While he was overwhelmed, he chose this school over places such as Penn State because it made him feel at home. Kevin Willard, the head coach for Seton Hall, really helped seal the deal for Jared.

“I had built such a great relationship with him. Texting, phone calls, conference meetings, it just felt like the most genuine relationship I had with all the other schools.”

Seton Hall has big goals this year including winning the Big East and making a final four. Although the last few years have been tough for them, getting eliminated in the first round in both 2017 and 2018. However, with the addition of Ike Obiagu, who played for Florida State last year and the play of senior Romaro Gill, the team has the defensive presence they needed. All American Myles Powell has picked up exactly where he left off last year and is the current favorite for Player of the Year.

“We have a lot of potential,” said Jared.

Jared knows that now, people pay attention when Seton Hall basketball plays. “There’s no more secret what Seton Hall’s about and what we do when we play basketball.” According to Jared, Seton Hall is “without a doubt” the best and most consistent basketball team in the state of New Jersey.

Jared knows that as a sophomore, he has a larger role to play than he did as a freshman and the change from year 1 to year 2 can be difficult for some. But the experience he gained as a freshman, playing in some big games, helped him become a smarter basketball player and a more mature person.

Since last year, the team seems to have taken that extra step to propel them to the top of the Big East Conference. They have been so close to winning the tournament, especially after a heartbreaking 2 point loss to Villanova in 2019. Jared himself has improved his play a lot so far this year, more than doubling his points per game, steals per game, and assists, all while playing 21 minutes per game. Like most college players, he has goals of reaching the pros but he still wants to make sure he has a degree from Seton Hall.

“Both are definitely things that I want to achieve. I think one can help me achieve the other” said Jared.

Like Jared said, Seton Hall is not a secret anymore. They have made some noise in the league and are aiming to finally return to the Final Four after a 30-year drought and are ready to go to war with anyone to prove that they are one of the best teams in the country.