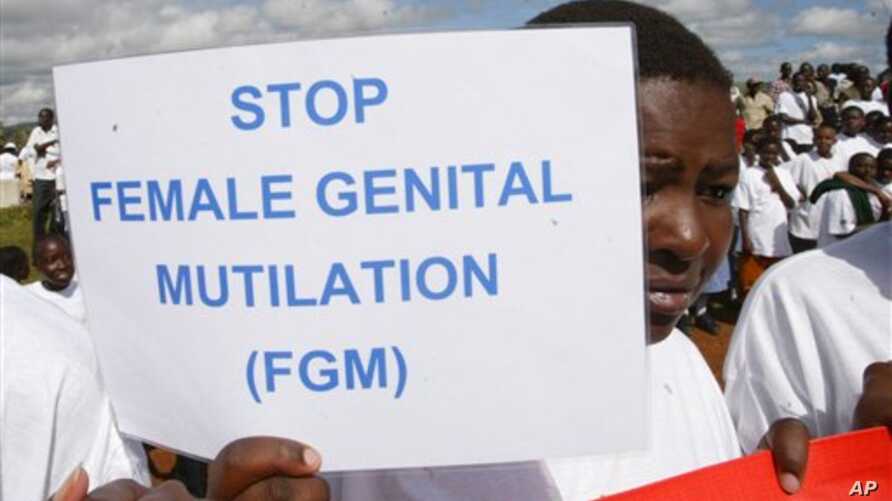 ** ADVANCE FOR FRIDAY, MAY 25 ** A Masai girl holds a protest sign during the anti-Female Genital Mutilation (FGM) run in Kilgoris, Kenya, April 21, 2007. At least 2 million girls every year are at a risk of undergoing FGM. The cut, which is generally done without anesthesia may have lifelong health consequences. (AP Photo/Sayyid Azim)

These words itch to be imprinted; in culture, in the paper, in history, and in minds.  This is a story that yearns to be read–its importance transcends the discomfort you might feel when reading the following–it needs to be heard. So pull up a chair, pour yourself a steaming cup of joe or douse your tea bag in scalding water, grab your beloved pen and journal, and get ready to be expertly informed on a present-day human rights violation.

Female genital mutilation, also referred to as FGM is defined by Merriam-Webster Dictionary as “a procedure performed as a cultural rite that typically includes the total or partial excision of the female external genitalia and especially the clitoris and labia minora.” There are four distinct types of FGM:  clitoridectomy, excision, infibulation, and “all other harmful procedures to the female genitalia for non-medical purposes.” Clitoridectomy is when the clitoris is partially or completely removed. Excision is when the clitoris and labia minora or labia majora are partially or completely removed. Infibulation entails tightening the vaginal opening, cutting and repositioning inner or outer labia, and may or may not include the cutting of the clitoris. All other forms of FGM may include cauterizing, scraping, incising, pricking, or piercing the genital area, for reasons other than medical purposes.

This practice occurs based on cultural, religious or social reasons which makes it thoroughly challenging to terminate. In societies with low literacy rates, people have said “‘it is what others do, and what we have always done.’” For these societies, it’s the proper thing to do in order to prepare a girl for marriage and adult life. It’s even believed that an uncut clitoris will grow to the size of a penis, or that the procedures make a woman more fertile. Both claims are medically incorrect. Interestingly enough, FGM is tied to women being faithful in a relationship. Because it decreases libido, or sex drive, in women, FGM is thought to make her less likely to stray from one man. This, again, is not true, as women leave their husbands for many reasons, many of which deal with the emotional connection with a man.

This is 100% a human rights violation, which is why the UN banned female genital mutilation in 2012, however, this was ineffective as FGM rates have not significantly decreased. Policy-makers and government officials fear that banning FGM may force people to take it “underground” which will, without a doubt, make an already dangerous procedure even riskier. The mortality rate is already thought to be 1 in 3, and banning it may make this higher.

The World Health Organization states that “Female genital mutilation violates a person’s rights to health, security and physical integrity, the right to be free from torture and cruel, inhuman or degrading treatment, and the right to life when the procedure results in death.” Female Genital Mutilation is a way that society and specifically male persons in power can control the lives of women. An NPR article states that when a woman’s vaginal opening is “tighter” it is more pleasurable for the male during intercourse. When the time comes for a woman to give birth, the infibulation procedure must be undone. What I find interesting about this is the following: “But sometimes after childbirth, providers — nurses, midwives or doctors — close it up again, often without asking the woman.” Read that again. Without asking the woman. It’s maddening, infuriating, and fuels one’s fire to make a change.

Surveys have proved that “in countries where FGM is common, most women aged 15-49 think FGM should end.” So why isn’t it? While this seems like such an objectively wrong concept, we must remember our roots. Coming from a Western, progressive perspective, it is hard to imagine women having such a lack of control over their own bodies. But abroad, these traditions are rooted deeply into the cultures and lifestyles of both men and women. It is incredibly easy, for my Hunterdon-County-bred self to voice my opinions of how wrong this seems. But it’s ignorant for me to neglect to see the years that this has occurred and the importance it holds in society. It merely proves the layered complexity of the issue, in which many things are at play.

After reading of FGM, a heartbreaking topic, you may be feeling one of the following: forlorn, crestfallen, hopeless, or just plain sad. I urge you to take these powerful emotions and turn them into curiosity, passion, and desire to make a change. Knowledge is power. So let these words wash over you and embrace them. Information facilitates change and an issue as dire as FGM requires all the help in the world, so get to it. Imprint this knowledge on others and imprint this on the world- be fearless!