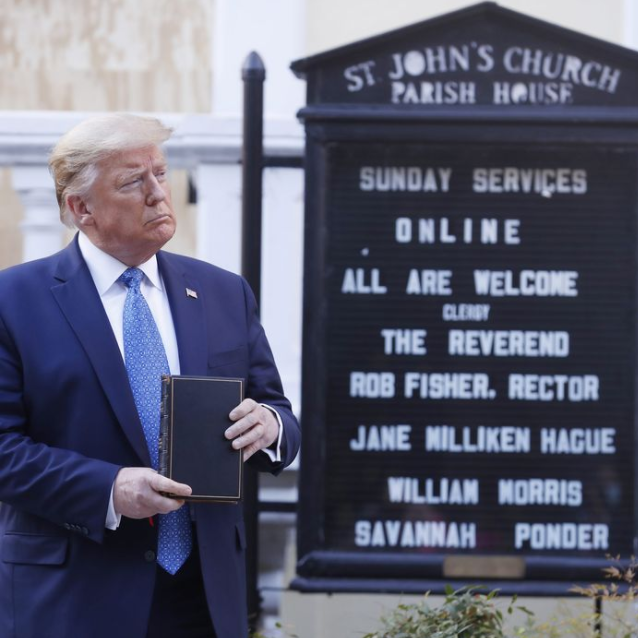 For the past week, we bore witness to peaceful protests, violent protests, plundering, and anger across our nation. We bore witness yesterday to our leader allowing our armed forces to tear gas peaceful protestors so he could stand in front of a church. We watched him, as he took the Bible from one of his aids, and held it up into the air. He used the church as a prop and the Bible as a symbol of disunion. Our nation is in pain, and our president once again has chosen the side of the oppressor. Now, if he had opened the Bible and turned off Twitter for a moment, I believe that he would have been appalled. Our president claims he is a Christian. Not even the Pope believes that. The Pope once said, “a person who thinks only about building walls, wherever they may be, and not building bridges, is not a Christian. This is not in the gospel.” For this reason, I do not believe Trump has ever been to a church service, nor do I believe he has opened the Bible. Jesus taught us that we should help one another. Gandhi taught us that we should help one another. Muhammad taught us that we should help one another. Basic moral law teaches us that we should help one another. We all know this primary rule, this moral code, that tells us extending a hand to one another can take down walls and unite us all. For this reason, I believe that the only way that we will be able to get through this difficult time is to be compassionate for one another. Despite the fact that we may have an incompetent leader, thousands of Americans have been uniting. Not under god, but under what I believe is the most powerful thing in life. Love. If you happened to be watching the news, you would have seen Donald Trump posing for cameras in front of a church, but had the cameras had turned their angle onto the crowd of protestors fighting through tear gas and rubber bullets, you would have noticed that the people were black and white. Hispanic and Asian. Male and female, and all across the spectrum. Gay, straight, Christan, Jewish, Muslim- people of all backgrounds were uniting under love to stand up against hate. Yes, although people are angry, they are tired of holding up the same ‘justice for all’ signs since the 1960s, I do believe they are uniting under love. Love for one another, and love for this country. Peaceful protesting is an optimistic sign, that people believe that this country can change and that they still have hope despite centuries of injustice. Love is a universal binding force taught in every religion. It is something that brings people together despite differences. Religion is more than just holding holy scripture up into the sky, it is our moral code. By using it as a stage prop, you are devaluing and abandoning its true meaning. At a time like this, it is imperative that we acknowledge the pain in this country, mourn at our losses, find our commonalities and unify. Not under God, not under our hatred for the president, but under love.