Will Live Music Ever Be The Same Again? 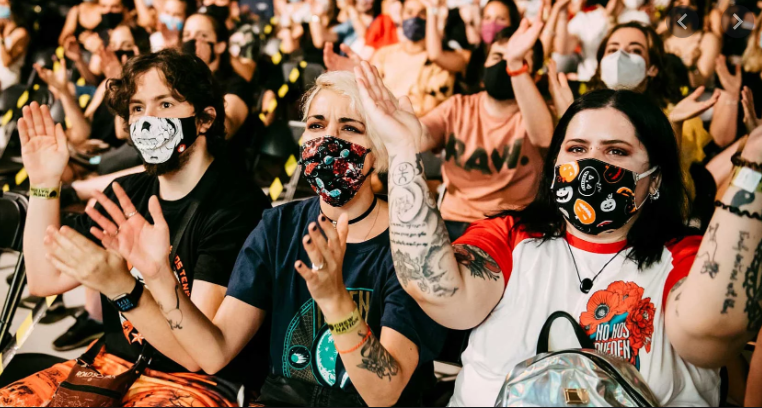 As America increases in vaccinations and begins to lift the mask mandate, live music is returning to those who missed out last year. Some well-known music festivals like Coachella are definitely canceled, while others have yet to make any announcements yet. Some festivals that are planned to open are HARD Summer, Essence Festival of Culture, WonderBus, Bonnaroo Music & Arts Festival, Firefly, The Governors Ball, Outside Lands, and more. Many of these festivals showcase similar stars like Billie Eilish, Justin Beiber, Lizzo, and more. So there are lots of options during the summer for music, and each one will follow protocols to keep people safe.

Artists like Justin Bieber planned to set his tour for his new album Justice in the fall initially, but the tour was postponed to 2022. Halsey will also be joining in the cancellation of tours with her Manic album tour twice. It was originally launched in 2020 and planned to start in July 2021 but postponed due to the pandemic to hopefully next year. Adding onto the list, Lady Gaga has rescheduled her Chromatica world tour of 2020, and the summer tour dates were changed to 2021 now to 2022 for North America and Europe. Others like Ariana Grande, Olivia Rodrigo, and Drake haven’t even made any tour announcements yet. There seems to be a pattern in rescheduling; the majority of these albums range from 2019 to recently and are rescheduled for 2022.

The bad news of these tours will disappoint many fans, but there are a few artists out there touring this year. Very soon, Dan + Shay will be starting their The Arena Tour in summer 2021 too. The duo has tickets running from August to December in North America. Machine Gun Kelly will also resume touring from September to December in North America for Tickets To My Downfall. The band Maroon 5’s anticipated new Jordi tour will start again this summer from July to October (Also April 2022). To add on, Harry Styles will be touring from August to October for his 2019 album Fine Line (The Love on Tour). In a 2020 tweet, Harry Styles states, “I really hope to play these shows and will have news for you in the new year on when they will take place. I can’t wait to see you all on the road as soon as it’s safe to do so. Treat people with kindness,” and now it’s really happening. Many of these artists and more have chosen the summer to make a return to live concerts, satisfying everyone after a long year of staying at home.

Many fans can’t wait to see their favorite artists, but there’s also a safety concern since there may not be temperature checks, proof of a vaccine, and negative COVID tests in some concert stadiums. While the protocols won’t be exactly the same in each arena, the general precautions should be required. Some requirements include “.. six feet of space between groups of ticket holders, who now only occupy every other row. Masks are required in indoor spaces, such as bathrooms or the visitor’s center,” (CNBC). One venue, called XL Live, is open now while the seats are socially distanced and at a limited capacity. The author Sean Adams writes, “In the intervening time, our current safety enhancements, including the required use of face coverings, remain in place.” Many venues and stadiums share the same main rule of having to wear your mask, whether it’s indoors or outdoors.

As shocking as it seems, the pandemic is slowly making progress, and opening up live concerts again is a sign that there has been improvement since 2020. Going to concerts may not be the same as before, but many people are fortunate that it was possible this summer. After having such a restricted summer last year, this summer hopefully will ease up a little bit for people to relax and cheer on their favorite artists. Enjoy these rare concert opportunities if you can go, and if not, there is so much more music to come this summer to have fun in your backyard.