Get Your Pink On: A Cure Worth Fighting For

Get Your Pink On: A Cure Worth Fighting For 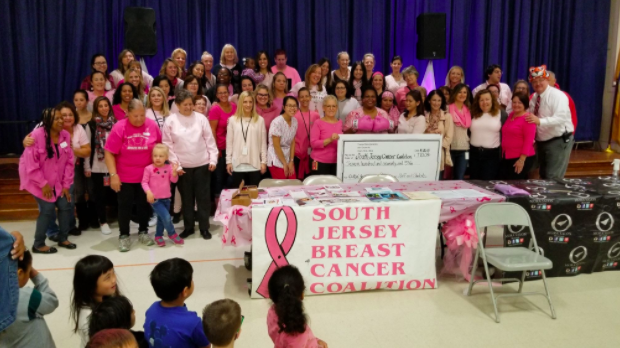 Imagine doing everything right: healthy eating habits, no drug or tobacco usage, being a five- mile-runner, with no familial cancer history. Nevertheless, you receive the news. The type of news where you have less than 3 months to live. Stage 4 breast cancer. You just began your life, only for it to be shattered right in your face. What do you feel? Anger, sadness, despair? Why me?

Unfortunately, this is a harsh reality for the 1 in 8 women in the US who develop breast cancer annually. 1 in 38 chances of not surviving at all.  Breast cancer is the most prevalent disease in American women, aside from skin cancers. But what does it really mean to have breast cancer?  Is it the pink ribbons decorated through the halls of the school, the football game pink outs, or the social media awareness posts? “Breast cancer is more than just a color. It’s more than being a ribbon. It’s about the individual journey. It’s about how you approach problems that survivors face,” says co-founder of the South Jersey Breast Cancer Coalition, Loretta Mikulski.

At age of 42, while she was sitting at her nurse manager’s office desk for an allergy and asthma practice, her phone rang. She was diagnosed with Stage 2B breast cancer, where the tumor measured between 2 cm to 5 cm and the cancer spread to axillary lymph nodes.

Loretta did follow doctors’ advice and started her treatment.  She completed eight weeks of radiation, took the proper medicine (tamoxifen) for five years, in addition to biopsy surgery, with four months of chemotherapy. She was assured that she was doing well. A few years later, she was diagnosed with Stage 4 breast cancer, where the cancer spread to other parts of her body with prognoses of less than a few weeks or months to live.  Despite all the odds, 26 years later she is cancer-free. “If you go by the book and the rules, I should be dead,” claims Loretta. Accordingly, how did Loretta, and millions of over breast cancer survivors, surpass the odds and escape their death? The answer lies within their perseverance.

Loretta wanted to give back to the community. Therefore, she and her friend founded the South Jersey Breast Cancer Coalition after they attended a National Breast Cancer Rally. The coalition is a non-profit organization that raised over $221,000 as utility and rent fund assistance to help patients financially who were in treatment, called the Client Assistance Fund.

Loretta concludes, “The most important thing is to be proactive and your own best advocate.”

Mary S was another survivor, who the physicians praised for her health, until one day. At the age of 54, she was diagnosed with an early stage of breast cancer. She felt like “ the privilege of life was deprived,” with the uncertainty that each day could be her last. She overcame the negative obstacles with her passion for music, singing, and nature. “Singing and music really helped me through the treatment because as a child, music filled the household.  I would learn the words to some of my old country’s traditional music during chemotherapy.” Unlike Loretta, who finds strength and comfort in her breast cancer support group, Mary’s support group consisted of her family, faith, and friends.

Mary’s advice to cancer patients and loved ones is, “Choose happiness over the unknown future. Choose something that makes you happy. Keep your mind thinking about the happy parts of your life. Go forward.” 43 years later, Mary is a grandmother, who is still dancing, surrounded by music, and enjoying her well-fought life.

What is Breast Cancer?
A cancerous (malignant) growth that begins in the cells and lines the ducts and/or lobes of the breast is known as breast cancer. Breast cancer is a group of diseases with varying symptoms. These cancer cells generally develop a lump that may be felt or seen on an x-ray. It can start on different parts of the breast, as some start in the glands where breast milk is made (lobular cancers), through the tissue of the breasts (sarcomas and lymphomas), or most of the time, they originate in the ducts that carry milk to the nipple (ductal cancers). Hunterdon Hematology Oncology states that “ Not all cancer diagnoses are deadly. In fact, breast cancer has a better overall survival rate than other solid tumors.”  However, breast cancer is still the second leading cause of cancer death in women worldwide
How Does It Start In The Body?

All tissues and organs in the body are built on the foundation of healthy cells. To replace worn-out tissue or mend injuries, the body continuously produces new cells. Normal cells are structured to multiply and develop in a regulated and orderly way so that each new cell replaces the one that has died. When cells might become aberrant, they can develop into a mass or lump, known as a tumor. Not all tumors, however, are cancerous. Some tumors are benign, meaning they develop slowly and do not spread to adjacent tissue or other regions of the body. On the other hand, tumors that are malignant have the ability to infiltrate and spread to other areas of the body.
What are the causes of Breast Cancer?

In 1940, a woman’s lifetime chance of having breast cancer was 5%. Currently, the risk is at 12%.4 Although the exact causes of breast cancer are unknown, the primary risk factors are well understood. Irreversible factors include genetic mutations, reproduction history, a polluted environment, family history of cancer, and previous treatment using radiation therapy.
October Breast Cancer Month History

The American Cancer Society and Imperial Chemical Industries’ pharmaceutical department developed a collaboration in October 1985 to create National Breast Cancer Awareness Month. The original objective of National Breast Cancer Awareness Month was to educate women about breast cancer and early detection procedures so that they could maintain good breast health. Gradually, the campaign developed to the point that medical institutions, government agencies, and NGOs collaborated with survivors to raise funds for research and educate women about the need for mammograms and other early diagnosis measures throughout the month of October.
Why should we care?
The average American will live for 41,000,000 minutes in the course of a lifetime. Compare it to the fact that every 2 minutes, 5 a woman in the United States is diagnosed with breast cancer.

Because breast cancer doesn’t recognize the difference between April and June, or December and January, it can attack at any moment. Breast cancer awareness does not end on October 31st. It should be a disease that is thought about all throughout the year.