February 28th and The Impact of Inclusivity 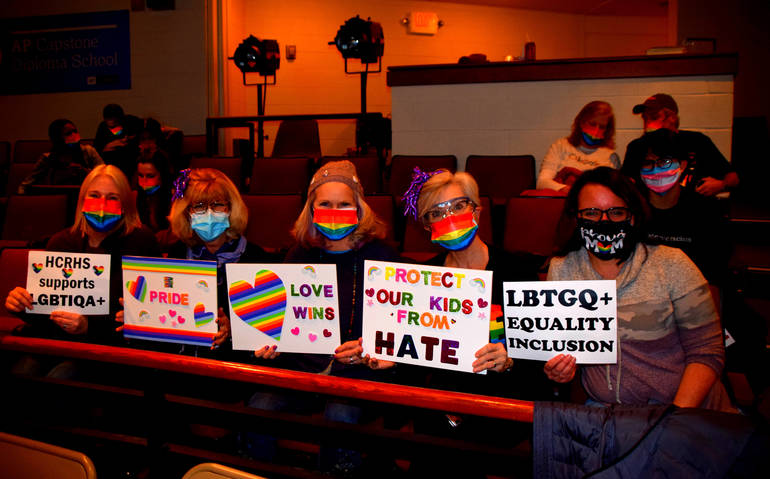 Community members present at the Board of Education meeting on February, 28th. They are adorned in rainbow masks that were handed out outside of the Little Theater prior to the meeting, and holding signs advocating for inclusion and acceptance at Hunterdon Central.

The students of Hunterdon Central Regional High School were united on Monday, February 28th in the school’s Little Theater in an astounding way. Only a couple of days prior, the Board of Education was informed there would be groups from New Jersey Parental Rights, Team PYC and Gateway Church coming to the school to demand the ban of several LGBTQ+ books from the library, and to argue against many of the inclusive policies the school has in place. In response, well over a hundred students, community members, and teachers came to the school to support the LGBTQ+ community and educational community at the high school. Many of these students, some teachers, and some community members gave speeches or testimonies to defend the school’s inclusiveness.

Anyone who walked into the room that night understood instantly which party was fighting for rights and which was arguing against them. The students, teachers and community members who hoped to defend people’s basic rights showed great unity even before one word was uttered; there in the 300-seat auditorium a majority of the people adorned rainbow masks. One of the first speakers was Victoria, the state director of New Jersey Parental Rights and Team PYC, who was also there representing Gateway Church. She was “concerned about the LGBT and the inclusion lesson plans.” She expressed that she felt our school was teaching a lifestyle, when they should instead focus on providing an education. Though she did not have any specific information pertaining to the policies she was protesting against, she did include ostensible facts about California school districts and their supposed teaching of pedophilia. Later she said that schools teach the “glorification of the LGBT history.” One might find it hard to believe she actually felt, as she’d claimed, that “all children should be cared for, respected, protected, and have equal rights”, when she chose to disrespect incredible activists who spent their lives building a more accepting environment that welcomes students apart of the LGBTQ+ community and also enabled the creation of safe spaces at Hunterdon Central. She believes that having LGBTQ+ inclusive lesson plans is teaching “lifestyles and life choices”, is “indoctrination”, and “to force the normalcy of the lgbt lifestyle onto our children and into your school’s everyday lesson plans is stripping of our religious liberty”.

In reality, indoctrination is when only one way of life or group of people is represented, and as Junior Benjamin Sherwood stated best, people are “never too young to be taught to be straight or cis[gender].” Having an LGBTQ+ inclusive curriculum is, as Senior Theodore Tsatsos said, “not indoctrination, it’s education.”

Not speaking about something is just as loud as it is insulting. Shame grows in the dark caves where the lies people are told echo, and there is no light and no sound to lead the way out. If all people see is the past discrimination, they would not believe anything has changed. This is enabled when people are not represented, and others take precise actions to ensure that. An accepting environment and representative curriculum is the only place people can hear the words and see the light that will guide them to safety and acceptance.

Rigo Salvatierra, Co-President of PULSE, HC’s Gay/Straight Alliance, also spoke, specifically about his Catholic upbringing. He shared his experiences reading the Bible growing up, saying “I realized that the words I was reading was coming from a place that never made me feel accepted.” He continued saying, “If God said he made no mistakes, I must have been his exception.” Even though he found himself in an environment that was often unaccepting of differences, he still found solace, in books in fact. They contained the representation he craved and in them he “realized that people like” him “were not mistakes”; instead they “were just as deserving of care and affection as those who found solace in worship.”

The protestors wished to take away a place of solitude from those who can’t always find one in their own lives. The message books provide of love and acceptance will carry over whether the stories are set in Flemington, New Jersey or Wonderland. These protestors wished to remove these representative books and make us believe they only existed in our fantasies.

Knowing that each lost little girl

Each of us somewhere in between

We belong somewhere in this world

Seeing ourselves in the books we read

Her poem also highlights what drives protestors like those that showed up on February 28th:

You fear what we are

You fear our love and strength

Fear is the basis of hatred

A never ending fire attacking everything in sight

You fear us discovering who we are

A Raritan township resident, Joseph Arce, also spoke. There is a school policy that allows for students to request to be referred to by different pronouns. The policy ensures that teachers comply with the students request as well as not disclose this to their parents. He voiced his disapproval of this. He also proved to have some misconceptions regarding the differences between sex and gender, which seemed to bolster his discontent when he expressed his views of the school’s policies. He acknowledged previous speeches requesting inclusive policies and states that despite the “inclusion this board aims to take”, they also have taken “the drastic step to exclude the parents from being notified”.

Whether or not a student chooses to share their preferences regarding gender or sexuality with their parents will never be placed upon the shoulders of a school policy. To share these things is their decision, and it’s not a school policy that holds people back from doing this; it is instead dependent on their home environment and whether they feel comfortable and accepted there.